Every month I look forward creating a layout or two using the Ali Edwards Story Kits™. I feel like these kits help remind me of the stories that won't get told unless I think about them. The story I told this month is a good example and I knew immediately that I wanted to document it with the Surprise Story Kit™. 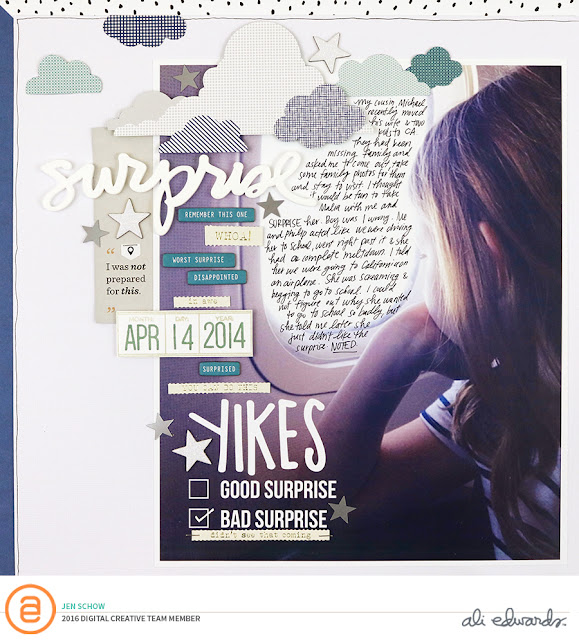 This is a story of a surprise gone wrong. A few years ago, my cousin and his wife invited me to come visit them in California and asked if I would take their family photos. It was a great excuse to get away for a few days and I decided to bring Malia to play with his kids. And I decided to surprise her. I had never surprised her in such a big way. And let me tell you, it did not go over well.

Here's part of the story as told in my journaling:


Me and Philip acted like we were driving her to school, went right past it, and she had a complete meltdown. I told her we were going to California on an airplane. She was screaming and begging to go to school. I could not figure out why she wanted to go to school so badly, but she told me later she just didn't like the surprise. NOTED.

I think one of the reasons I hadn't documented this story yet is because I didn't have a photo of the freak-out (I do have a video somewhere though...).  This photo of her looking out of the plane window looked kind of melancholy and I thought it would work perfectly. 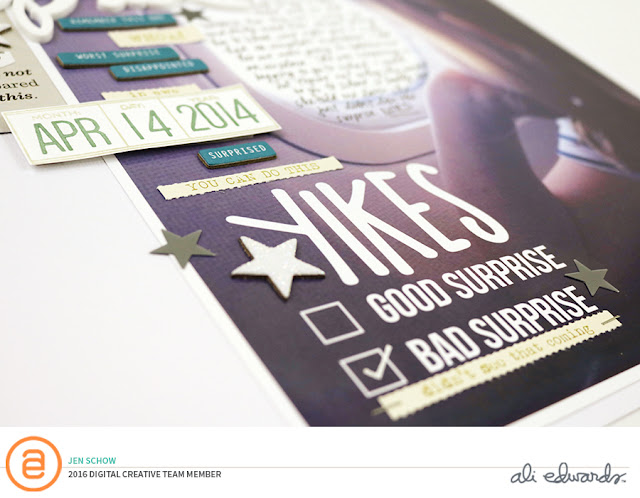 I used a combination of the physical kit and the digital kit for this layout. I added some digital stamps to the photo before I printed it at 8x10 and then I ended up writing my journaling directly on the photo in the window. I could have typed it there before I printed the photo and that would have worked great as well. There's just something I love about writing in the open space on a photo. I also used my fave new date stamps from Elle's Studio with Ali's Crafters Inks in Olympia and St. Helens. Seriously great. 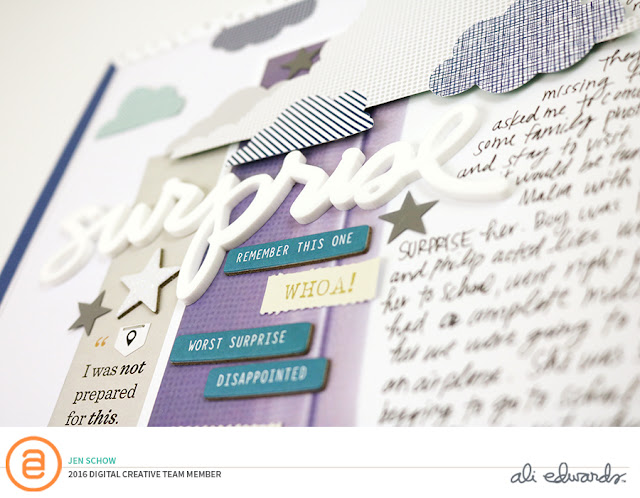 I added some clouds that were hand-cut from a Shimelle paper. I used mostly blues and neutrals on this layout and I like that it really helps focus on the photo and the story. The embellishments just help tell the story further, too, and that's one of my fave things about the Story Kits™.

I've linked to all available products below. Let me know if you have any questions and be sure to check out Ali's Story Kits™. I've said it a million times, but they have really changed my scrapbooking and help me tell the stories that matter. Love that. Grateful for that.

Thanks for stopping by!