Somebody put that Rock there for you...

Today I want to share a little piece of my heart with you.  I'm sharing this because I haven't been able to stop thinking about sharing this for weeks.  And because it changed my life.

On Tuesday, September 23rd I went to Persnickety Prints to be part of a live studio audience for Amy Tan and Kelly Purkey's upcoming Inspiration Live! class for Big Picture Classes which airs on November 1, 2014.  We got some darling kits for each of their classes.  Amy taught a mini album workshop and Kelly taught us how to make three scrapbook layouts.  All the while there were people filming the 25 or so of us that were there for the live class.

Stacy Julian (co-owner of Big Picture Classes) was the hostess and she was walking around trying to see who had a story or a tip or a technique to share that they could later add into the video for the class. (Watch for me if you sign up!) As I was making a page for Kelly's class, Stacy noticed that I had written an interesting title on my photo... 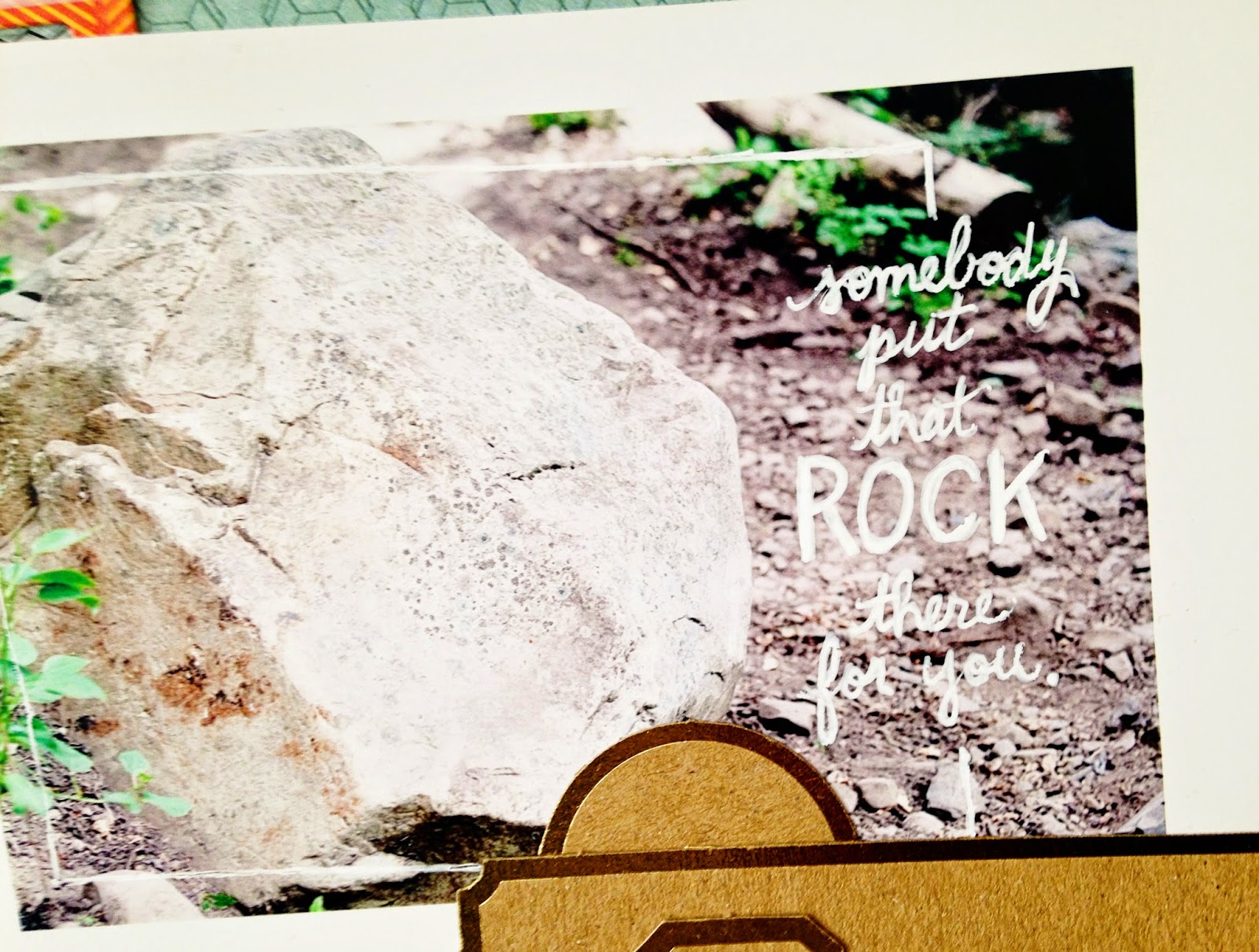 somebody put that ROCK there for you.

She said, "Oh!  I bet there's an interesting story there!  You wanna share it?" And she started waving for the video guy to come over.

But I immediately shut her down.

"It's a really good story," I said, "but it's kind of long and really religious so I don't think I should share it."

Stacy looked at me knowingly and said, "You're probably right." And then she said the thing that I haven't been able to get out of my mind.  I've thought about it literally every day.

"Isn't it funny that sometimes we don't share (or are afraid to share) the stories that are most important to us?"

It is.  Why don't we share those moments that impact our lives for good? Why can't we talk about religion?  Why can't I publicly share something that changed my life?

I'm here today because there is a really good story behind this photo.  Why wouldn't I want to share that?

I wrote the whole thing in my journal, so I will just share the entry.  I went to a youth girl's camp with my church (I'm a Mormon!) for four days this summer and it is there that this whole thing happened.  It's slightly embarrassing, but still worth sharing, so here goes:

“Today was the hike. Boo.  Anyone who knows me, knows I’m not a hiker.  I never have been. But now I’m so darn out of shape that hiking feels like dying.  So I decided to go with the first years.  I thought I heard someone say that the first year hike was more of a nature walk.  Uh-uh. No. It was super hard and uphill all the way. I remembered the hike a few weeks ago with our ward to Stewart Falls.  And I remembered how I didn’t make it.  But Bishop and Bro. Soderberg were very encouraging, and super nice about it, so with that thought in mind I started trudging up the trail. Already the tail end.  But that’s okay.  I was determined to do it this time.  A gentleman named Brother Nelson from the sixth ward stayed at the back. Even when I told him I was going to slow everyone down, he stayed behind me.  Bishop, knowing that I struggled the last time, said, “You got this.  You’re going to do great.  I said a special prayer for you this morning.” That struck my heart.  What a thoughtful man.  I said a prayer last night too and asked Heavenly Father to help me today. Because I knew it would be hard.  I’m so grateful I can go to my Heavenly Father with problems like that.  Nothing is insignificant to him.  I kept trying to think of ways I could get out of going on the hike, but I made the choice to toughen up and just do it.

So I trucked along determined to make it this time.  I had to stop quite a bit.  Those hills were tough.  Brother Nelson was SO patient and very quiet and calm. I would stop for a minute and we would sit there quietly looking around.  In my head I was thinking, “I could just stop here.  This is far enough.” But Brother Nelson was so patient with me and I didn’t want to let him down. Sometimes he would point out different plants or animal trails. Sometimes he would tell me that he wasn’t there to go fast.  He loved listending for the breeze the the trees.  He was very observant and could tell when I was struggling. Often he would tell me encouragingly that I was doing just fine, or he would point out the next resting place or let me know what the next part of the trail was like because he’d hiked it before.  Occasionally when we were resting he would tell me a little story about his hiking experiences.  Early on, he told me a story that I’ll never forget because it taught me a very important lesson.  He told me that when he was about eight he went hunting with his grandpa.  His grandpa would sling his elk or deer over his shoulders and carry it down the mountain.  It was such a heavy load.  Every once in a while he would find a big rock and exclaim, “Somebody put that rock there for me!” and he would take the deer off his shoulders and throw it on the rock and rest for a minute.
After he told me that story, every time we came upon a big rock, he would say, “Somebody put that rock there for you.” And I was able to take off my backpack and rest for a minute and get a drink.  It may have been a good thing that it was quiet and we were away from the rest of the group, because the spirit was working in my heart. I knew that Someone had put that rock there for me, and it was my Heavenly Father.  And that rock is my Savior.  And when I’m weary, and my load is heavy, and I feel like I can’t go on because it’s so hard, I can lean on my rock and I can give up my burdens and have my load lightened and I can be refreshed.

That hike was a lot of uphill climbing, and for me, it was hard.  Sometimes our lives are like that and we have many trials and feel heavily burdened.  But if we make the choice to go on, our Savior will step in and lighten the load for us. Our choices matter much more than our abilities because after we’ve done all we can do, the Lord steps in.  And it’s very helpful if you have a guide.  Someone who knows the way and can warn you of danger and tell you what’s up ahead.  For me, on the hike, that was bro. Nelson and I liken him to our dear Prophet President Monson, as well as our loving Bishop and his counselors. Quietly leading us along the path, not forcing us, but encouraging us to make that choices that will lead us to happiness.

I’m so grateful for the agency that we have been given.  I’m grateful to know that making wise choices will help me be prepared to meet my Savior when he comes again, and I know that He will come again.  I know our Heavenly Father loves us.  I know that he sent his Son to be our Rock.

THANK YOU STACY! For saying what you said and for the way you said it.

We don't all have the same religion or the same viewpoints, but I hope that we all have a Rock. Someone or something that brings us peace; that keeps us grounded.  And if you don't, go do something about it.  Go find that.  And then share it. :)

PS - There is an awesome movie called "Meet the Mormons" that hits select theaters around the United States today!

"Meet the Mormons examines the very diverse lives of six devout Mormons. Filmed on location and across the globe, Meet the Mormons takes viewers on a journey into the day-to-day realities of individuals living in the U.S., Costa Rica, Nepal and beyond. From their individual passions to their daily struggles, each story paints a picture as rich and unique as the next while challenging the stereotypes that surround the Mormon faith."

It's really quite interesting and entertaining and I highly recommend it!